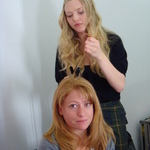 Ang Oxley-Evans is a hairdresser & make up artist. She started her career in Australia in the 1990's. She trained as a hairdresser first, then moved into beauty therapy & finally make up training with Peter Frampton (he won an Oscar for Brave Heart).
Ang worked in Australia for a few years on film, T.V & magazines before moving to the UK.
Since being in the UK, Ang has worked on various adverting commercials, stills, feature films, T.V shows and music videos.