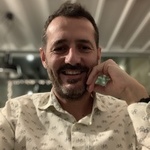 I am Jordi Nandes, a freelance from Barcelona and I work as a filmmaker / cameraman since 1999.

I work in the Moto GP world championship as ENG cameraman, working in the pitlane and doing different reports for different broadcasters. Also I work in another sport television crews, for example, X-Trial, Superenduro or Trofeo Lamborghini. I also work in mountain races as ultratrails in live or as ENG.

In other side, I work in the documentary field. Recently, I did two documentaries, one for the national catalan television, "Arenys, on tot va començar", and another called "The battle of social networks" buyed for different broadcasters in Australia, Germany, England or Spain, for example.

I feel very comfortable telling stories, and specially if I can combinate the documentary and the sport, fashion or gastronomy.

If you need something, call or write me and we can speak and know each other.