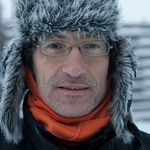 Antonio Pérez Molero has not received any rating yet! Be the first one!

Description: Silvia works as one of the nurses in the public health care in Spain. However, she has a special gift: she’s capable of saying “I’m very sorry” in five different languages. By virtue of the five languages that she spoken, Silvia colaborates with the Transplant Coordinator of Alicante for years, as interpreter for a large colony of foreign residents in Alicante. Augustín is waiting since ten months a heart that allows him to live and now he begins to suspect that the cuts in health carried out by the government, are to blame for the delay. Time and life pass quickly while they wait. Documentary, 58 and 74 min THE INTERPRETER is a documentary film directed by Antonio Pérez Molero and produced by INICIA FILMS, with the support of MEDIA program of the European Union, the Ministry of Culture (ICAA), the Generalitat de Catalunya (ICEC) and in collaboration with Lichpunt TV. First public screening: TVE, La 2, Documentos TV, may 2016