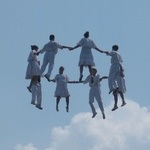 Accialt Flying Effects has not received any rating yet! Be the first one!

The idea of flying has fascinated man throughout history. We could say that since we humans invented "the gods and demons," we have always wanted to represent scenes where the characters fly.

The flying effects on film and on stage are just that: to create great scenes where the characters (actors) fly, of course! They simulate it ... a dance, a fly, a dream ... using flying effects acquire a different dimension.
As examples we might cite "Peter Pan and Aladdin" in plays or scenes from the famous Matrix weightlessness, and the many fights in the Chinese films.
ACCIALT Flying Effects is a company that works with the more advanced systems of flying effects, in terms of security and functionality we are leaders in our country.
These systems, whether manual or motorized, are made according to more demanding standards in the U.S.A.