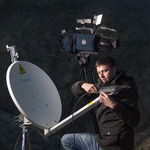 shuttlenews has not received any rating yet! Be the first one!

In Suttle News, we provide creativity when designing services, solutions and a high technical capacity in its execution.

We are specialized in providing technical and material support to television channels, producers and international agencies in breaking news services, documentaries and sporting events.

We have made ENG coverages and Live Stand positions via LiveU, in many sites such as the 2017 Fencing World Championships in Shanghai (China)

Also, we have covered armed conflicts in Lebanon or the defeat of the Islamic State in Iraq.

For the second consecutive year 2017/18 we are the Spanish production company chosen by Fox Sport with broadcast in the United States for Live Stand positions in Champions League football matches across Europe.