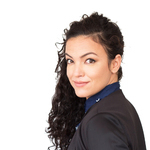 VANESSA BATISTA (Havana, Cuba, 1983). A member of the Association of Women Filmmakers and the Cuban Film Association, Vanessa Batista received a degree in Dramaturgy (theater) at Cuba’s Institute for the Arts (ISA). In Barcelona, she studied film directing at the School for Audiovisual Media of Catalonia (EMAV). She Works with several films production companies in the roles of direction, script, editing and production. Her first t feature documentary film The ones who stayed (2015 ) produced by Filmsnomades and Television of Catalonia was released in 2015, November, in the International Film Festival of Reus MEMORIMAGE , where received the MEMORIREUS - RABASSA award for best documentary film and selected In different film festivals in Cuba, Mexico and France, obtaining other recognitions. Previously, her short films WOMAN (documentary) and LULA (fiction) received the Best Documentary Short Award at Barcelona’s 4th Young Values Short Film, and Special Jury Award at the Navarcles Cine Solidario International Film Festival, among other prizes, mentions and nominations at films festivals around the world.
Festival.